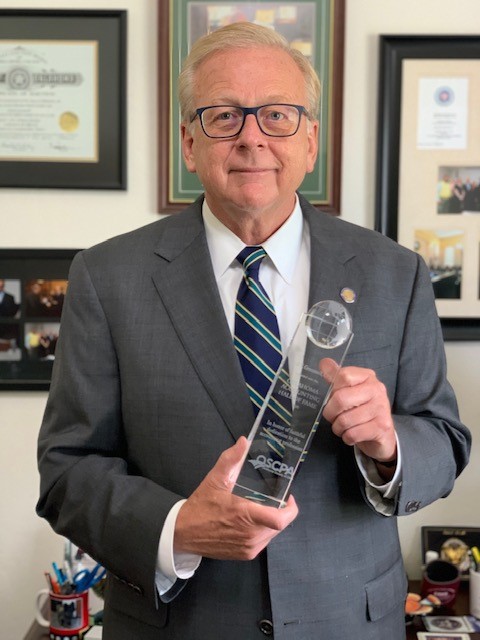 At the 2020 Annual Members Meeting on September 22, David Greenwell, CPA, became the 62nd inductee into the Oklahoma Accounting Hall of Fame.

After he earned his CPA certificate, the Oklahoma City University graduate enrolled in graduate school at the University of Oklahoma to earn his MBA. In fact, his pursuit of lifelong learning led him to earn his ABV, CVA, CFF and CFE certificates, just to name a few. Greenwell even became a licensed private investigator to assist in his litigation support role while he was in public accounting – which he did from the time he graduated college until retiring in April from RSM US in Oklahoma City, where he was a tax partner with the firm. He is currently in his first semester of teaching at Oklahoma Baptist University and, continuing his pursuit of learning, enrolled in a Ph.D. program at Oklahoma State University.

Greenwell has been involved with the South Oklahoma City Chamber of Commerce, the YMCA, the Oklahoma City Museum of Art. These activities led to him being appointed to the Metropolitan Library Commission and the Oklahoma City Bond Advisory Committee. Greenwell said, “I became more interested in political activities as I became more aware of how our lives are impacted by all levels of government.” He’s currently in his third term as a councilman for Oklahoma City, where he completed courses at the Kennedy School of Government at Harvard to earn his Executive Certificate in Public Policy. He is a former chairman and current board member of the Oklahoma Accountancy Board.

In his acceptance speech, Greenwell said, “The selection to the Oklahoma Accounting Hall of Fame is truly a great honor, and I am humbled to even be considered.  I have been greatly blessed with my wife, our children, and with what I believe is one of the finest careers that anyone could have. That is, being a CPA.”